Yesterday I arrived in Warsaw for the 2018 IAJGS International Conference on Jewish Genealogy. After dropping off my bags at the hotel, I headed straight to the Okopowa St. Cemetery to start photographing the gravestones (as part of the Okopowa St. Project). This was the first time I had visited this cemetery in 25 years (you can see some of the photographs I took then in my article on Jewish Gravestone Symbols).

My first advice is simply to dress appropriately for trudging through a cemetery. When I mentioned this to someone yesterday, they asked if I meant for purposes of modesty (tziut in Hebrew). That’s not what I mean. It’s possible, particularly in some cemeteries in Israel, that you may be required to dress modestly when entering a cemetery. My primary concern, however, particularly in an old cemetery like the one in Warsaw, where gravestones are falling over and there is a lot of vegetation growing around, and sometimes on, the graves, is that you need good shoes and long pants, as you will be walking on uneven ground and stepping over branches and other obstructions, possible dealing with mud, etc. Wear a hat and use sunscreen. Some good bug spray with DEET is also recommended.

Before going to the cemetery, do some research on what is known about it. Are there maps of the cemetery that will help you navigate the grounds? In the case of the Okopowa St. Cemetery, there are several somewhat-conflicting maps (as shown in my earlier article Okopowa St. Cemetery Maps and Statistics). Bring a map with you if you can. If there is no map, then think about tracking where you go to help create a map. It’s worth showing this image of the cemetery overlaid with the path I walked in the cemetery: 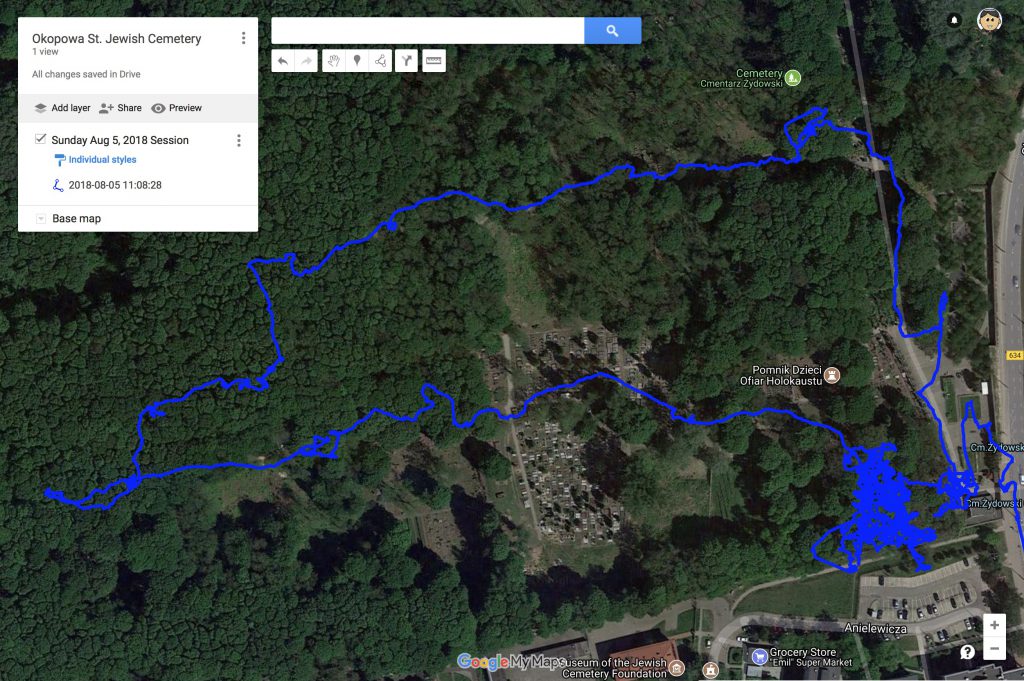 The important thing to notice in this map is the dense area on the bottom right. That shows me walking back and forth along the rows in the first half or so of section 1 in the cemetery. After doing that for some time, I then took a walk around other sections of the cemetery and back to the entrance.

Note that when walking in that section, the lines overlap a lot. That’s because there is no walking in a straight line in that section. Besides trees, some graves are surrounding by fences that block one from walking in some areas, and you end up needing to go back, walk around to the other side, take pictures, then go back around to where you started.

One of the main reasons I elected to use BillionGraves is its ability to link multiple photographs of the same grave. Looking at gravestone photos, I frequently want photos from different angles, or close up photos of the text, etc. Unless the text is very clear and takes up most of the gravestone surface, I like to take at least two photos of each grave – one of the entire gravestone showing the surrounding area, and one close up photo of the text. Here’s a video showing how I do this using the BillionGraves app:

There’s another reason to have multiple photos of a single gravestone, and that’s when the gravestone has text on different surfaces. Let me give an example. It’s not uncommon with Jewish gravestones to have both Hebrew and another language on the stone. Sometimes those texts are on opposite sides of the same stone. In that case you might find a photograph of a gravestone, and not realize there is more text on the opposite side. Here’s an example in the Okopowa St. Cemetery. Below is a photograph of a gravestone on the existing database of burials in the cemetery:

Now let me start with saying that the FDJCP has done an amazing job building their databases. They take the effort to extract the data from gravestones in the field, instead of doing so from photographs, which is many times difficult. They don’t, however, transcribe the entire text on gravestones, which can sometimes be useful, and certainly gives people a more personal look at their relatives than just the extracted names and dates. Note that in the FDJCP photograph, that there are two sides with text. They took a picture at an angle that allows you to see both sides. Now look at four photos I took of the same gravestone yesterday:

On the left you’ll see a photo of the entire stone. Next you’ll see the close-up photos of the two sides shown in the FDJCP photograph. I think anyone would agree that it is easier to read the text in these photos. The last photo on the right is actually a third side that has text. Considering the FDJCP’s goal is not to do transcriptions, but only to extract the important genealogical details, the fact that they don’t show a side of the gravestone with text may not matter to them, but it could matter to a relative looking for every detail possible.

I don’t fault FDJCP, quite the contrary. They’re doing amazing work with limited resources. This is, however, a good example of how we can all contribute to improving what is available.

I hope people find this useful, both for the Okopowa St. Project and for other cemetery documentation projects. If you’re photographing cemeteries this week, whether this one or others, share what you’ve learned in the comments.