To make it easier to decide which section of the Okopowa St. Cemetery that volunteers will photograph (as part of the Okopowa St. Project), I’ve been looking at the maps and existing data, to see if I could provide information that would be helpful.

While most cemeteries that existed before WWII in Poland have little in the way of maps to guide you around the cemetery, the Okopowa St. Cemetery has a glut of them. The problem is that these maps are not always consistent. Take for example, the following maps I located online:

These are just four maps, and there are several more available. The three on the left are all fairly similar. They all leave out sections 1A and 1L (sub-sections of section 1), and they have two section 8s, instead of an 8 and 8A.

The map on the right, which is what I initially used to set up the section groups for this project, was designed by the Jewish Historical Institute, and is posted on the web site of the Jewish Community of Warsaw. Unlike the others, this map has a single section called 105, which on on the other maps is divided among 105, 106, and 107. This map has a section 8A replacing one of the two section 8s in the other maps.

None of these maps show section 7, which is actually in the lower portion of section 15, above where section 8A is on the JHI map.

The largest source of information on the burials in the Okopowa St. Cemetery in in the online database created by the Foundation for the Documentation of Jewish Cemeteries in Poland (FDJCP). If you take a look at the database and the information on more than 82,000 burials, you can get overwhelmed. As I mentioned previously (in The challenges of online cemetery research) the FDJCP database has very strict searching, so for example searching for Cohen returns nothing, but Kohen has several hits. The database has a lot of information, but also does not match up with any of these maps.

Taking a look at the data, you can extrapolate some interesting statistics. Keeping in mind that the data is not complete (gravestones that are damaged, sunken, or missing cannot contribute their information), sometimes has inaccuracies (such as the wrong gender assigned to a burial record), I’ve put together some information on burials, which will be useful in choosing a section to photograph. To start, when did the burials take place in the cemetery? Here’s a chart showing the number of burials per year, starting in 1800 and going to 2010. The first burial is actually 1804, although older stones are less likely to be in readable condition at this point, so the chart is probably skewed to more recent burials. This chart is what is known according to the FDJCP database: 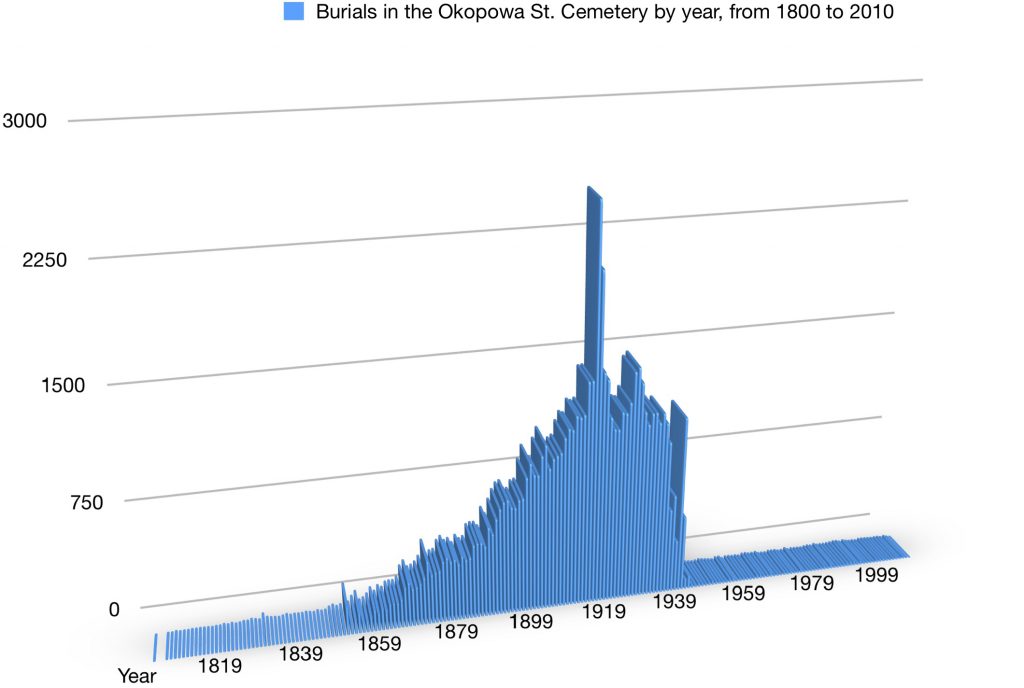 What you can see in the chart is that the burials are low in number up until about the 1850s, and then they rise dramatically until there’s a huge peak during WWI and the subsequent Spanish Flu outbreak. There’s another small peak about 10 years later (any have a theory as to what that is?), then a large drop in 1938-1940, followed by a big spike in 1941. In 1942 there are still over 500 burials, but after the war the cemetery will never see more than 25 burials a year (while before the war it averaged well over a thousand a year).

Keeping in the differences in the sections mentioned above, I’ve also figured out how many burials there are, and how many rows of gravestones, are in each section. According the the FDJCP database, the sections have the following stats (explanation below):

For each section, you can see how many rows there are in the section, and how many burials. You can also see if the section is all or mostly one gender. M or F for Male or Female, and MF for both. When there’s an asterisk after the letter (i.e. F*), it means the section is almost completely that gender, but there may be a few burials of the opposite gender mixed in. Within each section, even if it is labeled MF, it’s not uncommon for large numbers of rows to be of a single gender.

I hope this makes it easier for volunteers to choose a section to photograph, and will help people coordinate which rows they will photograph when splitting up the work.