Earlier I posted a chart showing the most popular girls names in Israel in 2014, from 14 different cities. The data came from a report released by the Central Bureau of Statistics (CBS), and I had just reformatted it to make it easier to read. That report didn’t have the information on boys, so I couldn’t post that information. I’ve since received the information on boys, and put together a similar chart for boys names, although there are some caveats. If you are not interested in comparative demographics and onomastics of the Jewish and Muslim populations of Israel, you should skip directly down to the chart below.

People who have read other reports on popular names in Israel this year probably noticed that the most popular name in Israel is Mohammed. That’s not because more Muslims are born in Israel than Jews (although there are more Muslims born per capita, the difference is not as extreme as it was in the past, and the overall number is still much lower). It’s because one in seven Muslim boys in Israel were named Mohammed in 2014, while the next closest ratio among Jews was one in forty. There is just a larger pool of first names used among the Jewish population than there is among the Muslim population.

As this blog is about Jewish genealogy, I’ve removed the Muslim names, but indicated which cities had names removed with an asterisk. Where things get tricky is where names overlap. In some cases names are clear, such as the most popular Muslim names Mohammed and Ahmed. Other names, while pronounced differently, are spelled the same in Hebrew, like Joseph (Yosef in Hebrew, Yusef in Arabic). Some names are for the same person but spelled very differently, such as for Abraham, which is Avraham (אברהם) in Hebrew and Ibrahim (אבראהים) in Arabic.

Some names are used by both Jews and Muslims, but are much more popular among one group than in the other. For example, in 2013 (I don’t have the full overall rankings for 2014 yet) Omer (עומר) was the 3rd most popular name among Muslim boys, and the 17th most popular among Jewish boys. Omer, in Hebrew, comes from the word for a sheaf (bundle) of wheat used in the bible, while the Arabic version would be Umar, who was the Caliph (ruler) of the Muslim world who accepted the surrender of Jerusalem in 637 CE. The Mosque of Umar, which sits on the Temple Mount, was built later, but named after him (not to be confused with the Dome of the Rock which also sits on the Temple Mount, but is not strictly speaking a mosque.

Adam (אדם) was the 5th most popular name among Muslim boys, and the 51st most popular name among Jews. In the case of Adam, in general you would think if it showed up in the top ten then it was as a Muslim name, but where things like that get thrown off is in Tel Aviv, where Arabs (Muslims and Christians) make up less than 5% of the population, Adam showed up in 2014 as the 5th most popular name. That would seem unlikely to be due to the Arab population unless all Arabs in Tel Aviv named their sons Adam. On the other hand, this could be evidence of the large variety of names used by Tel Aviv Jews, lowering the overall score for the names used among them, while bringing Muslim names higher up in the list due to the scarcity of names used compared to the Jewish population. As further evidence of this, in 2013 the top ten Muslim boys names made up 41.47% of all names, while the top ten Jewish boys names made up only 18.41% of all names.

However, as mentioned, in 2014 one in seven boys in Israel were name Mohammed. In Tel Aviv Mohammed shows up in 47th place, yet less common Muslim names Adam and Omer show up in 5th and 7th place respectively. While some of the reason clearly has to do with those names also being used among the Jewish population, that wouldn’t seem to explain their popularity completely. Perhaps, and this is just a guess, Muslims in Tel Aviv are more likely to name their children using names common among both Jews and Muslims, which skews the popularity of those names. It’s also possible that that Adam, which simply translates as Man in Hebrew, is more popular among the Jewish population of Tel Aviv than in the country overall.

Interestingly, this disparity doesn’t exist among girls names, where there is an equal range of names for both Jews and Muslims. The top ten names of both Jewish and Muslim girls make up just over 17% of names, and in fact the Muslim girls names are slightly lower than the Jewish girls, showing a slightly higher variance. Perhaps I’m cynical, but the lack of disparity between girls names might explain why the chart given by the CBS only showed girls names. Without some names making up a much higher percentage of usage, the large cities they chose would be unlikely to show a Muslim name. In the cities they chose, there were no Muslim girls names in the top eleven names, so while they do include Muslim names among the geographic distribution records, the list of names in the chart I posted previously were singularly Jewish. This is the case without the CBS needing to remove names as I’ve done below (something they’ve gotten in trouble for in the past).

I should point out that while the girls chart did not include any exclusively Muslim names, the rankings shown were certainly influenced by Muslim children, in at least one case. Miriam (מרים), the number two girls name in Jerusalem in 2014, also happened to be the number two girls name among Muslims in 2013. Among Jews in 2013, Miriam was the 25th girls name. Clearly Miriam could be more popular in Jerusalem among Jews, and that’s probably the case (being a more traditional name), yet it seems at least a few places in the ranking for that name in Jerusalem are due to Muslim girls.

Just to be clear, while it’s true that Adam and Omer which I remove from the rankings are obviously used among the Jewish population, and I know Jewish people in Israel with those names, I’m only removing them because it seems unlikely they would show up in the top eleven names without the Muslim population, and as a list of the most popular Jewish names, I’ve removed them to illustrate the top Jewish names. For the record, the names I removed are (with original ranking):

With that out of the way, here’s the chart for Jewish boys names in 2014, divided into the same 14 cities used in the girls’ chart (click on the chart to see it larger): 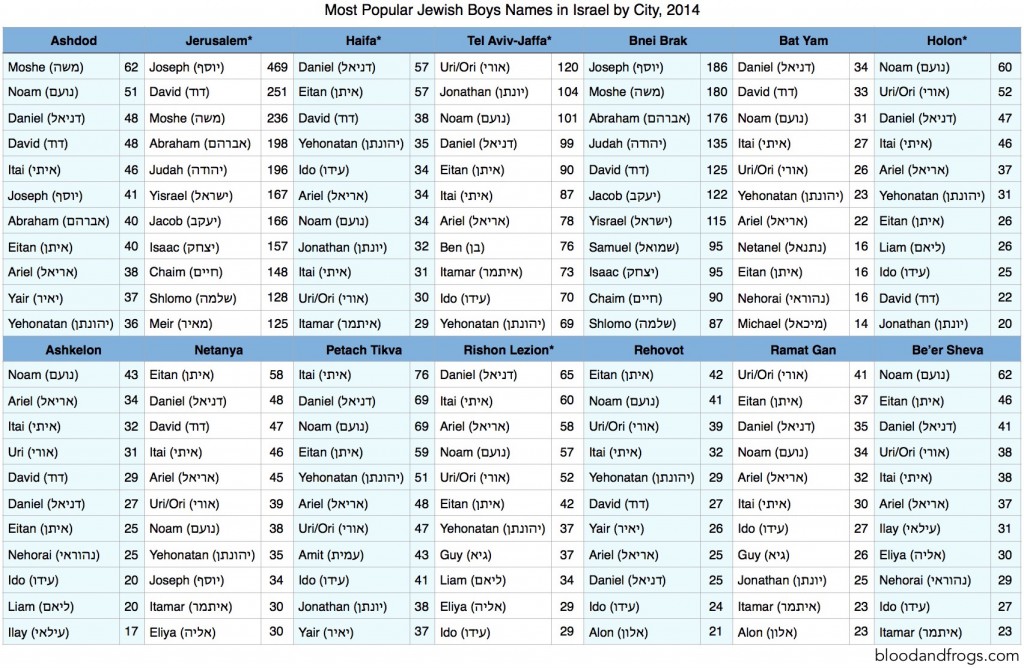 Like the girls chart, the most popular boys name overall (Noam) is only the top name in three out of the fourteen cities. The overall rankings countrywide for boys is Noam, Uri/Ori, David, Joseph, Eitan, Itai, Ariel, Daniel, Yehonatan, and Moshe. Interestingly the only other name at number one in three of these cities is Daniel, which is down at number eight.

It’s also worth pointing out that while Noam (נועם) is the most popular boys name in Israel, and Noa (נועה) is the most popular girls name, Noam is also used a girls name in Israel, while Noa is not used as a boys name. Don’t be confused by Noah (נח), of biblical ark fame, whose name ranked only at number 281 among Jewish males in Israel in 2013, and is not used among girls in Israel. In the US, on the other hand, Noah is actually the number one name used for boys.

You might notice that for the name אורי I’ve listed two English versions, Uri and Ori. That’s because Hebrew doesn’t use vowels, and while these two names can be differentiated by using nikud (a kind of vowel system that uses marks such as dots and dashes below and above the letters), there is no nikud in the official data, so there is no way to differentiate between the names Uri and Ori.

Some of the more uncommon names from the perspective of English speakers include Yehonatan, Eliya, Nehorai, and Ilay.

Yehonatan is a different form of Yonatan, or Jonathan. The origin of the name is biblical, but used by less well known people than the name Jonathan. Perhaps the popularity of Yehonatan is a way to use a less common spelling for a popular name, something very common in English naming, although more common I believe for girls names, such as Sophia/Sofia, Chloe/Khloe, Zoe/Zoey, etc.

Eliya, maybe better spelled Aliya, but I didn’t want it confused with the common word Aliya (pronounced differently), used to denote someone who moved from outside of Israel to Israel. The root of the word is not the same. The word comes from the bible, where it is not a name of a person. Nehorai and Ilay are both taken from the Talmud, Nehorai the name of a rabbi, and Ilay the name of two different rabbis.

I don’t know why these names have become popular. I suppose some research into popular culture (to see if there are famous people in Israel with these names) and a comparison with previous years (to see when the names became popular) could help determine the reasons. If you have an idea about these names, or any other names for that matter, please share your thoughts in the comments.