Israel’s Central Bureau for Statistics (CBS) released some statistics on names given to children in 2014. The report (in Hebrew) they released is a bit of a hodgepodge of information, giving the most popular Jewish boys names for the country in a table, but not giving that information for girls. There are some nice charts showing trending names. One interesting one is on the rising popularity of the girls names Adele and Romi: 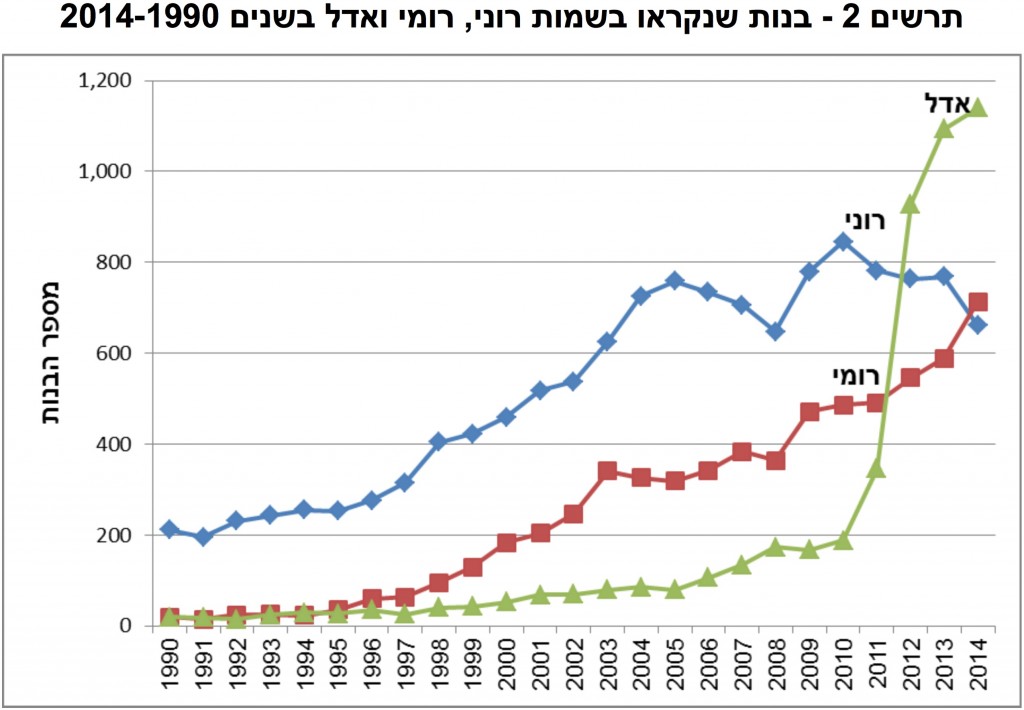 That’s Adele in green, Romi in red, and Roni (maybe Ronni would be a better spelling) in blue. Roni is a name that has been around a long time, and I’m guessing they put it in to show the contrast to Romi, which twenty years ago basically didn’t exist, and is now becoming very popular. Adele is obviously skyrocketing in popularity, and it’s not hard to figure out why, considering the worldwide popularity of the singer by that name. 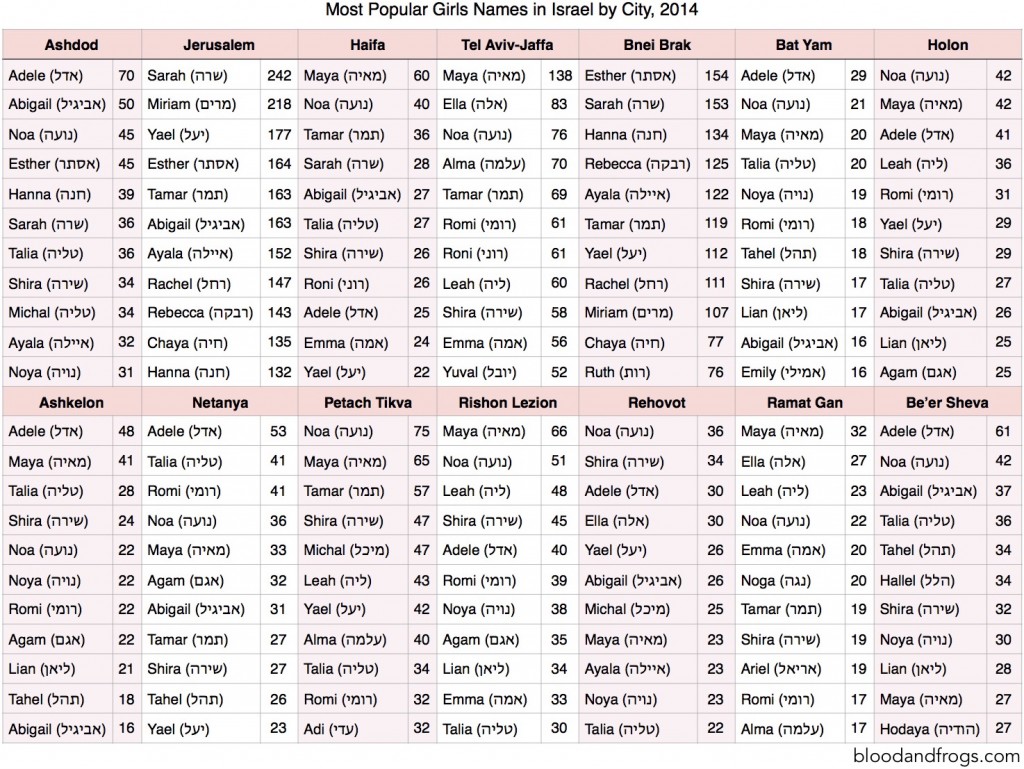 There are a few interesting things in the name lists. For example, I know that overall the most popular girls name is Noa, and yet in the 14 large cities they showed, only three of them have Noa in the top spot. The two cities that Noa doesn’t show up in are the two largest (in terms of births), Jerusalem and Bnei Brak. Of course, the names may show up below the threshold used in this chart (the top eleven) and may even contribute more to the name’s popularity than the cities where Noa shows up as number one. This is because the number of girls given the 11th most popular name (Hanna) in Jerusalem was 132, while the number of people who received the number one name in Rehovot (Noa) was only 36. It’s possible that there were more than a hundred girls in Jerusalem that received the name Noa, which would be roughly three times the influence on the national result than Rehovot’s contribution, even if it was much further down the list.

One name that showed up several times is Agam. That name makes me think of the artist Yaacov Agam, famous for his 3D art, but it’s likely the name comes from the same place Yaacov Agam took it from (his original surname was Gipstein), which is the Hebrew word used for Lake (or pond, or pool). The word shows up once in the bible, in Psalm 114, used as part of the Hallel prayer recited on major holidays and on Rosh Chodesh (celebration of the new moon each month). In Psalm 114, the phrase is:

Without the full set of data, it’s not possible to glean so much information about the cities themselves, but you can get a sense of which cities have faster growing populations. One would guess from the fact that Bnei Brak has less than half the population of Tel Aviv (the two cities border each other), but has more births that is growing significantly faster. Of course, it is possible that the data is simply showing that in Bnei Brak people chose from a smaller pool of names, or that certain names were so popular there than they show up in larger numbers in these lists, but the overall birth numbers are not skewed as much. I suspect both are true (that Tel Aviv has a wider variety of names, and that there are more births-per-family in Bnei Brak which is more religious than Tel Aviv).

It will be interesting when the full dataset is released to see how some of the names fall out. What the report does show is that the top girls names overall were Noa, Tamar, Shira, Maya, Yael, Adele, Talia, Abigail, Ayala, and Sarah (just not in a nice table). Note that Noa is on the decline and Tamar on the rise, so if current trends coninue it’s likely Tamar will beat out Noa next year or soon thereafter.

I hope they release a similar breakdown of boys names by city, as in my experience the full datasets are only for the country, not broken down by city, so if they don’t release it in a similar report, there won’t be any way to figure it out.