It appears that Ancestry.com just killed off their desktop genealogy software Family Tree Maker. They will continue to sell it until December 31, 2015, and will cease supporting it on January 1, 2017. That means people who use the software can continue using it for another year, and Ancestry will continue to support features like TreeSync (which allows users to sync their FTM tree with their Ancestry.com tree). 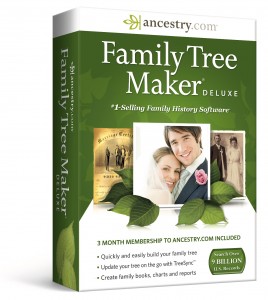 Personally, I was never a huge fan of the software. Of course they never fully supported the Mac platform, but I tried all their Mac versions, and even beta tested the second version for them. I had two major complaints with the software. The first was that it was buggy. That might have just been the Mac version, I’m not sure. The second, was that the user interface was very counter-intuitive to me. there were other problems, like its handling of images, and other minor complaints, but it seems pointless to go over them now. The main reasons I continued to try using it was the potential for syncing with Ancestry.com, and for sharing files with other relatives who used it, but it was never my primary genealogy software.

Unless I’m mistaken, that leaves MyHeritage’s Family Tree Builder as the only desktop genealogy software left that is paired to an online family tree site.

Interestingly both Ancestry and MyHeritage have added Mac versions of their desktop software in recent years. The only other major genealogy software to make add Mac support recently has been RootsMagic, which used the same Windows-emulation technology as MyHeritage to port their Windows software to the Mac.

I don’t know the market share of all the different genealogy programs out there, but I imagine there will be a mad scramble to try to grab abandoned FTM users. I don’t know what market share FTM had overall, but my impression is that is was significant. I don’t know if any other genealogy program is able to successfully import data from FTM files without losing any data. I imagine developers of other programs are now looking at how to improve their importing.

I remember a company a few years ago that was developing software to sync between different genealogy programs as well as online services. The company was called Real Time Communications and the product was called AncestorSync. That product never really made it out of beta as far as I can tell (I’m pretty sure the company closed around 2012 or 2013 at the latest), but I wonder what happened to their sync technology. Someone might want to brush off some old code if it’s still able to convert FTM files.

I’m not sure Ancestry has handled the ‘retirement‘ of their desktop software so gracefully. A lot of people are undoubtedly upset about FTM being discontinued, and whether or not they will have support for a year, they still have a lot of work ahead of them to get their family trees transitioned to new software. I wonder if Ancestry’s hope is that users will just sync their trees to Ancestry’s online trees, and forget about desktop software altogether. That’s certainly the easiest option for a lot of users, but they lose a lot of the advanced features that come with desktop software (like charts, reports, media handling, etc.). I hope Ancestry will show a little more compassion for their users and provide more options in the coming year for getting their data out of FTM and into other full-featured programs. Time will tell.