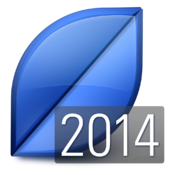 The first is Heredis, now called Heredis 2014, and available through the Mac App Store at 50% off through November 3, at the price of $29.99 (instead of the normal price of $59.99). The updates for this version are listed as:

The second application updated is MacFamilyTree, now at version 7.1. Also available via the Mac App Store, for $49.99 ($29.99 through October 27). The updates for this version are listed as:

This week I’m attending the IAJGS Conference on Jewish Genealogy in Boston. Last night I attended the Mac BOF (Birds-Of-a-Feather) meeting. It was packed from one of the room to the other, thanks to the hard work of Doris Loeb Nabel and other volunteers.

One of the things I noticed at the meeting was that many of the people did not know about all the Mac genealogy software available. Most knew about Reunion, and Family Tree Maker, but many did not know about others. I thought it would be useful to take a quick look at the genealogy applications available for Mac. Most of these I’ve discussed in the past to differing degrees, but this is probably the first time I’ve listed them all together. The list consists of most Mac genealogy software (in alphabetical order) that have been updated in the past year (and I’ll point out a few that have not been recently updated recently at the end). If I miss any that you use, post in the comments.

Reunion is a very popular genealogy program for the Mac, with advanced reporting and charting capabilities. Relatively easy navigation through your tree. A very active support forum. Paid separate companion apps for iPhone and iPad. Costs $99 on their web site, and from some retailers including Amazon.

There are also some other genealogy programs like iFamily for Leopard, myBlood, ohmiGene, and PA Writer II. Not all of these are updated frequently, and I’m not as familiar with them. I also took a look at the various genealogy applications available through the Mac App Store back in February. This includes a few I don’t mention here, including the app Memory Miner, which is not strictly speaking a genealogy program, but a ‘digital storytelling’ application, and can import GEDCOMs to help assign names to people.

I’ve mentioned Heredis before, which is a genealogy application for Mac and PC (with free companion app available for iOS) created by a company in France. I haven’t used it extensively, so I can’t write a full review, but there are aspects of the application that seem very interesting to me, such as the illustrated charts (i.e. family trees that actually look like trees) and book publishing.

Normally the price for Heredis for Mac or PC is $59.99, but for the next 4 days (through July 7) the price has been dropped to $10.99. That price is available if you buy it from their own online store (Mac/PC) or if you buy the Mac version through Apple’s Mac App Store. For that price, one might be convinced to buy it just to use some of the features like the charts or book publishing. If you’ve used Heredis, let other know what you like about it in the comments.

I’ve been using the same genealogy program for about twenty years (Reunion), but that doesn’t mean I don’t look at what else is available. I’m always looking at what other genealogy programs are available for the Mac, and although I haven’t switched, I am open to it if I found a program that really fit my needs better. I’ve written in the past about genealogy programs available through the Mac App Store (and others that are not), so I’ve mentioned MacFamilyTree before.

Yesterday MacFamilyTree received a major update, to version 7, so I thought it was worth mentioning again. It’s also worth mentioning because they are offering upgrade pricing ($29.95 instead of $59.99) to everyone who buys it in the Mac App Store through July 31. It’s a strange quirk of the Mac App Store that in essence companies cannot really offer upgrade pricing to their existing users. When you buy an application from the App Store, you own it forever. To get around this problem, some software companies release a new version of their program on the App Store as a separate program, and then reduce the price for everyone for a limited time. In this case, Synium Software, the makers of MacFamilyTree, are allowing anyone to get the upgrade pricing for the first two months, which I think is quite generous (sometimes companies only offer the upgrade pricing for a week).

There are a lots of nice features of MacFamilyTree. In the past, my biggest problem in switching programs was the handling of images. Reunion has a very nice feature that allows you have one image, and cut out the faces of multiple people for use in your family tree. For example, if you have a family portrait with ten family members in it, and it is the only photo you have for all the people, you can select out the faces from the one photo for each family member. This might not seem like a major feature, but when you use it extensively to attach photos of people to their records, it’s hard to switch to a program that doesn’t offer that (and doesn’t import the cropped images I’ve already set up). I don’t know if MacFamilyTree 7 has a similar feature or not, but that’s one of the things I will be taking a look at when I look at the software.

Here’s a look at the new version of MacFamilyTree in a video that Synium released:

When I find the time to take a look in depth at MacFamilyTree 7, I will try to post a review here. If I do end up switching, I’ll try to explain how I moved everything over.

I should just add that I’m very happy that there are now several good options for genealogy software for the Mac. Besides Reunion and MacFamilyTree (Mac App Store), there’s Heredis (which is 35% off through June 9 – $38.99 instead of $59.99 – on their site and in the Mac App Store) and GEDitCOM II (software which has some very unique features that I like, but needs a major overhaul to make it competitive with these others). One of the nice features of most of these programs (not GEDitCOM II) is the availability of a companion app that runs on the iPhone and/or iPad. Reunion has separate apps for iPhone/iPod Touch ($14.99) and iPad ($14.99), MacFamilyTree offers MobileFamilyTree which can run independently of MacFamilyTree (normally $15.99 – now also 50% off through July 31 at $7.99), but can also share data with it, and Heredis offers Heredis for iOS (which is free).

Also of note is that MyHeritage, which offers their free Family Tree Builder software for Windows (a $75 Premium version is also available), has said that the next version (Version 8) will be available on the Mac. It will be interesting to see how that software compares with these other programs. I hope they will offer the app through the Mac App Store, and offer the premium features and subscriptions through in-app purchasing.

Update: Synium Software responded via Twitter that they do support cropping multiple images out of a single photo, as well as importing and exporting that information. Always happy to see companies that respond quickly and directly to customers.