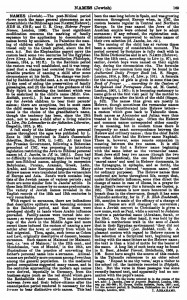 Israel Abrahams was the editor, from 1888 to 1908, of the Jewish Quarterly Review. He taught at Jews’ College, London, before he became a reader of Talmudics at the Univeristy of Cambridge from 1902 to his death in 1925. He was perhaps best known for his work, Jewish Life in the Middle Ages, published in 1896.

Between 1908 and 1926, the Encyclopedia of Religion and Ethics was published. In volume 9, published in 1917, is an article titled NAMES (Jewish) written by Abrahams. The entire encyclopedia can be downloaded from Archive.org, although I’ve made a PDF of just the page with the entry.

I’ve provided the full text of the article below, with minor changes. These include adding some paragraph breaks to make it easier to read, expanding most abbreviations, and adding links to many of the sources referenced.

NAMES (Jewish) — The post-Biblical period shows much the same general phenomena as are discernible in the Biblical age (see NAMES[Hebrew]; HDB iii. 478 ff.; and George Buchanan Gray, Hebrew Proper Names, London, 1896 — see copy on the Internet Archive – PT). The most significant modification concerns the marking of family sequence by the application to descendants of names borne by ancestors. In Palestine the naming of children after their grandfather can be traced only to the Greek period, about the 3rd century B.C. But the Elephantine papyri carry the custom back some two centuries for the Egyptian Jews (Gray, in Studien zur semitischen Philologie, Giessen, 1914, p. 161 ff.).

In the Rabbinic period the custom was well established, and it was recognized that a change had occurred from the older Israelite practice of naming a child after some circumstance at his birth. The change was justified by Rabbis of the 2nd century A.D. on two grounds: (1) the need of aiding the preservation of family genealogies, and (2) the loss of the guidance of the Holy Spirit in selecting the incident which was to be enshrined in the child’s name (Midrash Genesis Rabbäh, xxxvii. — see this passage in translation in the Internet Archive, pg 299. — PT).

It has never become customary for Jewish children to bear their parents’ names; there are exceptions, but in most cases the child seems to have been posthumous. More usual is the choice of the grandfather’s name, though the tendency has been, since the 13th century, not to name a child after a living relative (Leopold Löw, Die Lebensalter in der Jüdischen Literatur, Szegedin, 1875, p.95). (This has been the custom of Ashkenzai Jews since 13th century, but not of Sephardi Jews who do name after living relatives, particularly grandparents. – PT)

A full study of the history of Jewish personal names throughout the ages was published by Leopold Zunz in 1836 (reprinted in Zunz’s Gesammelte Schriften, Berlin, 1876, ii. 1-82). At that time the Prussian Government, following a Bohemian precedent of 1787, was proposing to introduce legislation restricting the Jews to Biblical personal names (cf. Joseph Jacobs, in Jewish Encyclopedia ix. 156 f.). Zunz had no difficulty in demonstrating that Jews had freely used non-Biblical names, adopting in succession Babylonian, Persian, Aramaic, Greek, Latin, Arabic, and later European designations. Many Hebrew names were translated into the vernaculars of Europe and Asia. Zunz’s work contains long lists of the Jewish names of various periods; and there are some similar lists in Jacobs’ article. In these lists Biblical names by no means predominate. The variety of Jewish names revealed in the English records of the 12th and 13th centuries is very remarkable.

With regard to surnames, there are indications that descriptive epithets were becoming common in the Rabbinic period, and that these were developed chiefly in lands where Arabic influence prevailed. Family-names were turned in surnames; so were place-names. The many wanderings of the Jews in the Middles Ages and more recent times induced the custom of naming a new settler after the town of country from which he had migrated. Then, again, such terms as Cohen and Levi, originally descriptive of descent, became surnames. Such names as Maimuni (or Maimonides), i.e. ‘son of Maimon,’ in the 12th century, and Mendelssohn, ‘son of Mendel,’ in the 18th, are illustrations of the practice of converting the father’s personal name into a surname.

Animal namers are probably more common among Jews than among the general population (See my article Animals and Name Pairs in Jewish Given Names on this topic – PT). In the mediæval period occupations suggested many names, and in the centuries approaching the modern age names were derived, especially in Germany, from the business signs (such as the red shield which gave the Rothschilds their name). The intercourse between Jews and their fellow-citizens after the emancipation period rendered it necessary for the former to bear distinctive civic names. This had been the case long before in Spain, and was growing common throughout Europe when, in 1787, the custom became regular in Central and Northern Europe. In the year named the Jews of the Austrian empire were ordered by law to adopt surnames; if any refused, the registration commissioners were empowered to enforce names of their own selection (cf. Jacobs, loc. cit.).

The naming of the child has at various times been a ceremony of considerable moment. The period covered by Scripture is fully dealt with in the Bible Dictionaries and in article NAMES (Hebrew). From the 12th century, according to Löw (p. 97), not earlier, Jewish boys were names on their eighth day, during the circumcision rite. The formulæ vary; the now common form may be found in the Authorized Daily Prayer Book (ed. Simeon Singer, London, 1914, p. 305 (See a copy of the American edition of Singer’s siddur at the Internet Archive – in this edition look for page 449 – PT); cf. Löw, p. 101). A formula for the naming of girls is given in some rites (see Book of Prayer . . . according to the Custom of the Spanish and Portuguese Jews, ed. Moses Gaster, London, 1901, i. 180); it is becoming customary to name girls at the first visit paid by the mother to the Synagogue after the birth of the child (Singer, p. 312).

The names thus given are mostly in Hebrew, though sometimes the vernacular names are merely transliterated into Hebrew letters – a custom which goes back to Talmudic times. Such names as Alexander and Julian were this treated in the Rabbinic age. Often the Hebrew and common names corresponded either exactly or in meaning, but in modern times there is frequently no exact correspondence between the Hebrew and ordinary names; this the chief Rabbi Hermann Adler had the name Naphtali. There is, however, some remote connexion in meaning between the two names. It is still customary to find a Hebrew name beginning with the same letter as the vernacular name. Most Jews still bear two names (though the two are often identical), the one Hebrew (termed ‘sacred name’ and used in Hebrew documents, in the Synagogue, in epitaphs, and so forth), the other vernacular (termed ‘common name,’ used for ordinary purposes).

The Hebrew names thus conferred are borne throughout life, except that, under Kabbalistic influence, some rites direct the change of name in case of illness, in a prayer for the patient’s recovery (for a formula see Gaster, p. 195). This custom is now more honoured in the breach than in the observance, though it has some Talmudic authority, for in Talmud Bavli (Babylonian) Rosh Hashanah, 16b, mention is made of the efficiacy of a change of name.

Names are still changed on conversion thus a Jewish convert to Christianity is given a new name, such as Paul, while a convert to Judaism receives a patriarchal name (Abraham, Sarah, or the like). On the other hand, it was held by the Rabbis a meritorious trait in the sons of Jacob that in their Egyptian environment ‘they did not change their names’ (Leviticus Rabbah, xxxii. 5).

A pleasant custom with regard to Hebrew names is the selection of a Scriptural text, beginning and ending with the same letters as the Hebrew name; the text is then a kind of motto for the bearer of the name. A long list of such texts may be found in Seligman Baer, Abodat Yisrael, Rödelheim, 1868, p. 106. (See the opensiddur.org project to transcribe Baer’s Avodat Yisroel – PT) Some have sought the source of this custom in the Talmudic references to an older school usage. ‘Repeat to me thy verse,’ says a visitor to the school (cf. the incidents recorded in Hagigah, 15a). But the verse in these passages was some recently-learned text, and apparently had no connexion with the pupil’s name.

For all articles on Jewish names from this site, go to the Names page.