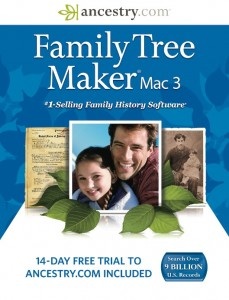 Ancestry.com has released the third version of their Family Tree Maker (FTM) application for the Mac (yes there was an older version a decade or so ago, but I’m ignoring that). The first version was released in 2010, and in fact was the subject of the very first post on this blog. It was actually the subject of several posts, as I tested it out to see if it made sense to switch from using Reunion to FTM Mac. In the end I decided against switching, due to several reasons. The most important reason was simply that he software seemed a little too buggy at the time.

Another issue which bothered me, which seems minor, was that you could not take a single photo and use it to create multiple head shots to represent many different people in your tree. For example, if you have a single family portrait representing a branch of your tree that has ten individuals in it, in Reunion you could add the same photo to all ten people’s records, and then crop it to show just the individual you want. In fact, you could add the same photo twice to a record, and crop it differently each time. This is useful if you want to put in a full photograph with background as part of that person’s multimedia record, but want a simple cropped headshot for the person when showing them in a tree, for example.

One thing that bothered many Mac users with the initial version, was that it wasn’t based on the then current Windows version (FTM 2011) but on an older version (FTM 2010). Even then, the features of FTM for Mac were not on par with FTM 2010 for Windows. There was a time when this kind of thing was common for Mac users, but it’s fairly rare nowadays. To add insult to injury, Ancestry charged more for the Mac version with less features than the Windows version.

The second version of FTM for Mac was released in 2011. It brought one major feature with it, TreeSync, which allows you to sync your tree in FTM with a tree on Ancestry.com. A pretty big feature. It always makes me wonder when they release minor updates or even major updates like the new version 3, however, that they always add ‘Improved TreeSync’ as a feature of the update. Clearly there were some problems with the implementation of TreeSync in FTM for Mac 2. FTM for Mac 2 kind of felt like FTM for Mac 1 was a beta version, and this was the real version 1. It was better, but still not up to par with the Windows version, and still more expensive.

Now FTM for Mac 3 has been released. The big differences are not in the features it seems. The big difference is in the beginning of treating Mac users on a more equal footing with Windows users. For the first time, the price of FTM for Mac is the same as the Windows version – $39.99 (currently on sale for $29.99). Also for the first time, FTM for Mac shares the same file format as the current Windows version. That is the most significant change to me. Now people on Mac and Windows can exchange their full data files without having to do any kind of conversion (earlier version came with a Windows application for converting the Windows files – but if you had the Windows file already and you were on a Mac – no luck) or by using GEDCOM. This version is still not at feature parity to the current Windows version (FTM 2014) but at least it seems like they’re setting the groundwork for that in the future.

One test I tried with this new version was to try to import a FTM 2012 Windows file. Oddly it started the import process, but then quit in the middle and said the file wasn’t supported. This brought back memories of past experiences with the older version where the error messages seemed bizarre. Why should it even try to import the file if it’s not compatible? Why it wouldn’t do a version check before doing the import is beyond me.

Although the file formats are now the same, it seem FTM Mac 3 still cannot import older files from Windows. I think it actually might be able to import really old FTM for Windows files (up to version 16 from 2008), but none from the more recent generation of the software.

My next test will be to see if I can sync a tree from a cousin who uses FTM on Windows through Ancestry.com. It’s unlikely I will switch from Reunion to FTM for Mac 3, especially with my pet-feature of cropping multiple faces out of a single photo still missing, but I am looking forward to trying to collaborate with my cousin through TreeSync. We’ll see how that goes…