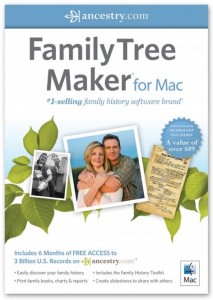 So I’ve been using Reunion on my Mac for a long time. More than ten years at least. Probably more than 15. I like Reunion. For the most part I like the way it works, and even if the user interface is hopelessly out-of-date, I still like the user interface compared to many other genealogy programs on the Mac. Being more modern isn’t always better if the paradigm doesn’t work for you. I like Reunion’s family paradigm.

One thing I’ve always disliked about Reunion is the fact that it’s upgraded so infrequently. It’s been about three and a half years since the last major update. Before that it was about four and half years between upgrades. It’s true that there are lots of little updates and bug-fixes in-between upgrades, but this is not the same thing. There’s no excuse for upgrades that take four years. There are plenty of people that defend this upgrade policy, and say they don’t want to upgrade every year since it costs so much, but that’s a silly argument since I’d rather upgrade for $20 a year then pay $80 every four years. Leister, the company that makes Reunion, also does something else a bit maddening, which is that they absolutely refuse to mention anything about future versions until they are already shipping. Now, this would be so bad if they shipped new versions every year, but when your upgrade cycle is over four years, people begin to wonder if the product is actually going to be upgraded, or if they should start looking elsewhere…

Over the years I’ve tried just about every Mac genealogy program out there, and while some are very powerful, and some have great user interfaces, none have worked the way I wanted them to, and in the end I’ve always ended up back with Reunion. One program which has always intrigued my inner-nerd is GEDitCOM II, which is more of a genealogy development system, allowing you to create your own user interfaces and features, using AppleScript, Python or Ruby as scripting languages. One day when I have more time to spend on it, I will probably look more closely at it, although for the time being I like my genealogy program to be easy to use and quick when entering data, and I don’t want to think about scripting languages.

It’s always bothered me a bit that none of the ‘big’ genealogy programs out there had versions for the Mac. One of the most popular genealogy programs on Windows is Family Tree Maker (FTM), which while it has gone through a number of owners over the years, is now part of Ancestry.com. I was happy to hear they finally came out with a Mac version of their product, even if it based on a year-out-of-date version of the product (FTM for Mac is based on FTM 2010 for Windows, not the current FTM 2011 for Windows). Some people reading this are saying to themselves that there was a Mac version of FTM in the past, but that was so many versions and owners ago, I don’t really consider that to be anywhere near the same product. So FTM now has a Mac version – how does it stack up against Reunion?

Let’s find out together. As I try to transition my 2000+ person family tree from Reunion to FTM for Mac, I’ll be posting my impressions on this blog. Next posting – launching FTM for Mac and importing a GEDCOM.

2 thoughts on “Should I switch from Reunion 9 to Family Tree Maker for Mac?”