Memorial Day in the United States is tomorrow, May 30, 2011. In time for this day, app-developer AppTime has launched a new iPhone App/web site combo called BillionGraves.

The concept is quite simple – provide a way to use camera-equipped phones to photograph gravestones and upload them to a central website for transcription and searching by others. So you download the cell phone application, use it to photograph gravestones, upload the photos to the website, and then you or others can see the photos and add transcriptions which make them searchable. The link to Memorial Day is two-fold – first, that these photographs can be a form of memorial to those who served their country and died in that service, and second that people are off from work can visit cemeteries, and while there photograph gravestones and upload them to the web site.

The idea is quite good, but I foresee some problems.

I like the idea because anything that makes the process of documenting graves, transcribing them and making them searchable, is a boon to genealogists. The problem is that I don’t think AppTime has put quite enough thought into the back-end of this site. Things can be fixed over time, but it would have been better to get some of these things right at the beginning. 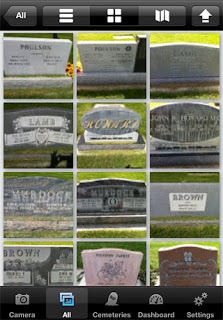 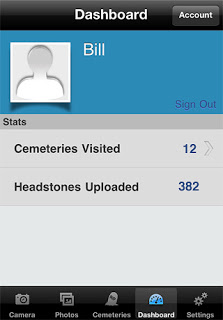 The biggest problem I have is the duplication this creates with other sites like FindAGrave.com, which I’ve written about before. I understand that AppTime wants to make money, and by controlling the server they can better control revenue streams, but I’m not sure there is room for a newcomer here. Far be it from me to tell anyone not to go into a market because it’s crowded. I’m a big believer in the market and if they can truly innovate here, that’s great. If they just muddle the process and split up the graves indexed on their site and the others, then they are not contributing but detracting from the process. I also wonder if  they will be able to build the large cemetery database needed to make this work. It might have made more sense in this regard to sell an App that is a front-end to FindAGrave.com.

Let’s put aside the issue of competition, however. I signed up to the site and tried it out. The interface is simple, which is great. Even without using the cell phone app, I can choose to transcribe photos. If I choose Transcribe I see the photo and a simple interface for adding the names and dates from the gravestone. This simplicity masks some omissions, however. For example, there is no place to add the maiden name of a woman. My only choices, in fact, are to add Prefix, Given Names, Family Names and birth and death dates.

So there is no way to add the maiden name, nicknames, or other information that may be present on the grave. I can of course add a nickname into the ‘Given Names’ field and I can add the maiden name to the ‘Family Names’ field, but how? If I add the maiden name one way such as in parenthesis, and someone else does it differently, then what if I only want to look for women whose maiden names were Smith? I can’t do that, and BillionGraves.com can’t add this later without making people go back and correct the data later.

There is no way to fully transcribe a gravestone, to add information on the individual, to add a memorial to the person, etc. This can all be added later, but then how do they know which graves already transcribed have more information to be added once they offer that capability?

There is no way to add more than one photo of a grave, such as when there is writing on both the front and back. There also doesn’t seem to be a way to prevent duplicate entries of the same grave. Perhaps they’re expecting the GPS coordinates uploaded with the photos to help them figure out duplicates, but there is nothing that indicates that to me, and nothing to prevent someone from photographing a grave already photographed.

While FindAGrave.com could improve the experience quite a bit, they do support the ability to link graves of spouses, parents, etc. This is an important feature, and one that BillionGraves needs to support.

From a Jewish perspective, of course, there doesn’t seem to be support for other languages such as Hebrew – common on Jewish gravestones.

The iPhone app is free through June 1 (the next two days) and then AppTime will be charging $1.99 for the app. Presumably the web site itself will remain free. An Android app is currently being worked on and they hope to release it in the next few weeks. For more information on BillionGraves, go to their web site or their blog.

I hope AppTime fixes some of the initial issues with the web site and wish them the best of luck in this new effort. I also hope FindAGrave.com wakes up and puts out their own cell phone apps to provide a way to upload geo-tagged photographs to their site as easily. Let’s hope competition improves both sites.