I have been meaning to write something about the topic of Ethical Wills, a very fascinating topic in my opinion. Ethical Wills have a long tradition in the Jewish community, and essentially outline one’s moral and ethic code for your children and other descendants (separate from a monetary will). The first ethical will might, ironically, be the same chapter in Genesis that I described in my last article where Jacob was blessing his sons and compared some of them to various animals. Those comparisons were in the context of what today we would probably consider an ethical will (although I don’t suggest comparing your children to animals in your will). 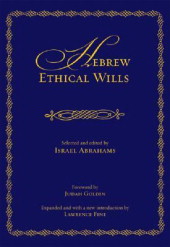 In any case, I haven’t had time to write about this topic yet, but I just saw that JPS is having an overstock sale for the next three days, and that their important work Hebrew Ethical Wills is one of the books that is on sale for 70% off. That puts the cost at $10.50 for a new copy from the publisher. I think that’s a pretty good deal for an important work on this topic. I’ve embedded the discount code into the link so it should get added automatically, but if for some reason it doesn’t show up the code is OS2011 and just add it once you add the book to your shopping cart. If you want to see the other books on sale, go to the sale page. Note that the sale ends in three days on May 20, 2011. Presumably that’s the end of the day Eastern time in the US, since JPS is based in Philadelphia, PA. The book itself contains excerpts of various forms of ethical wills that date back almost a millennium, including texts by Nachmanides (Ramban), Maimonides (Rambam) and the Vilna Gaon, but also lesser-known individuals as well. It is certainly interesting that the moral code shown in these documents over hundreds of years is essentially very similar, as they are derived from the same religious and historical Jewish sources. If one wanted to show that religion can dictate morality, then these documents would certainly make a very good case-study.

I’ll warn you that the book is a facsimile edition of a book originally published in 1926. As such is it not the easiest book to read. A new introduction was written in 1976, and some new material including excerpts of Gluckl of Hameln were added in 2006 to add a female perspective to what is otherwise all writings by male authors. If you follow the link to the book on Amazon (in a box to the left) you can use their ‘Look Inside’ feature to see what the book looks like, or if you prefer there is a Google Preview of the book as well on the JPS page on the book. Of course, if you’re reading this post after May 20, 2011, then the Amazon link is probably your best bet to find a deal on the book.

[The sale is now over, but you can get it from JPS or from Amazon if you’re interested in reading it.]