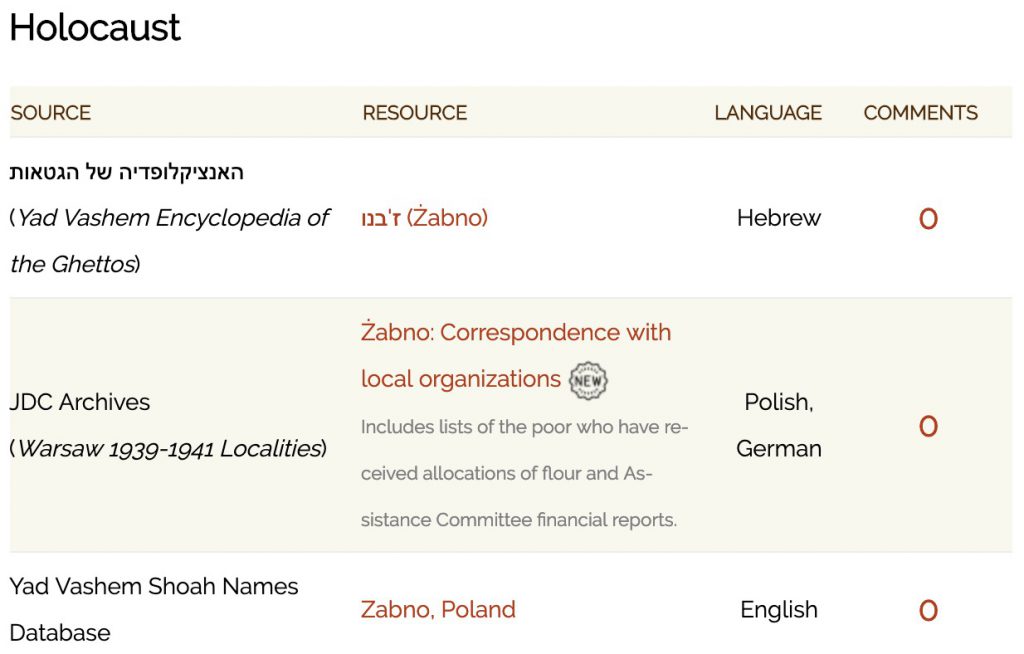 See that there’s a link to the Yad Vashem Ghetto Encyclopedia (in Hebrew), and a link at the end to the Yad Vashem Names database. In the middle is the link to the JDC Archive page, and you can see a short description on the contents underneath the resource title, as well as the NEW icon next to it showing that it’s been added in the last three months. When you click on the link you’re taken to the JDC Archives page for that collection:

When you click on the Look Inside link, you’ll be shown the list of files for that collection:

If you click on one of the files you’re shown a summary for that file:

When you click on the PDF logo, the PDF file of the scanned pages will load in your browser. You can then save that PDF to your computer if you want.

In adding links to these files in the Compendium, I’ve also added 39 new towns. When I started adding Polish towns, I thought my list was fairly complete. As I continued to find new towns that had Jewish communities and add them, I realized I would probably never be 100% complete. That said, however, the list of Polish towns on this site is now over 1400 towns. Each town has links to information that will confirm there was a Jewish community of some kind there. In some cases the community had 50,000 Jews, and in some cases it may have had less than 50. I’m not setting a lower bar on the number of Jews that lived in a community, as my goal is that anyone searching for information on their families in Poland will find their ancestral towns.

In order to confirm that there was a community in a town, I’ve searched for any other evidence I could find, including seeing if there are Pages of Testimony filed in Yad Vashem that show people having been born in the town. Sometimes it was enough to find an article mentioning the Jewish community there. I’ve tried my best to verify each town in the Compendium. Occasionally, it’s not 100% possible to know that the town being mentioned in the JDC files is the town I believe it to be. There are no GPS coordinates in the files. Having worked on these towns for several years now I have a fairly good sense of when a town is correct. If I’m really not sure, I generally leave out the town. As such there are several towns in with files in the JDC archives that I did not yet add. Also, as an aside, some of the towns with files are currently in Ukraine, and thus out of the scope of the Compendium town-level data. To see all the towns, see the original finding aid from the JDC Archives site.

Let me know what you find in the files. Post a comment below, or on the page of the file in the Compendium.