I’ve written before about the importance of using the JewishGen Family Finder (JGFF). I’ve even written about it on the JewishGen blog, see: JewishGen Basics: The JewishGen Family Finder (JGFF). The basic concept is that users add surname/town pairs to the database, and other users search for their surnames and towns, and can contact the other people researching the same names and towns. It can’t be understated how important the JGFF is for Jewish genealogy research, as a central point of connection for families that have become split up over the past century and more. 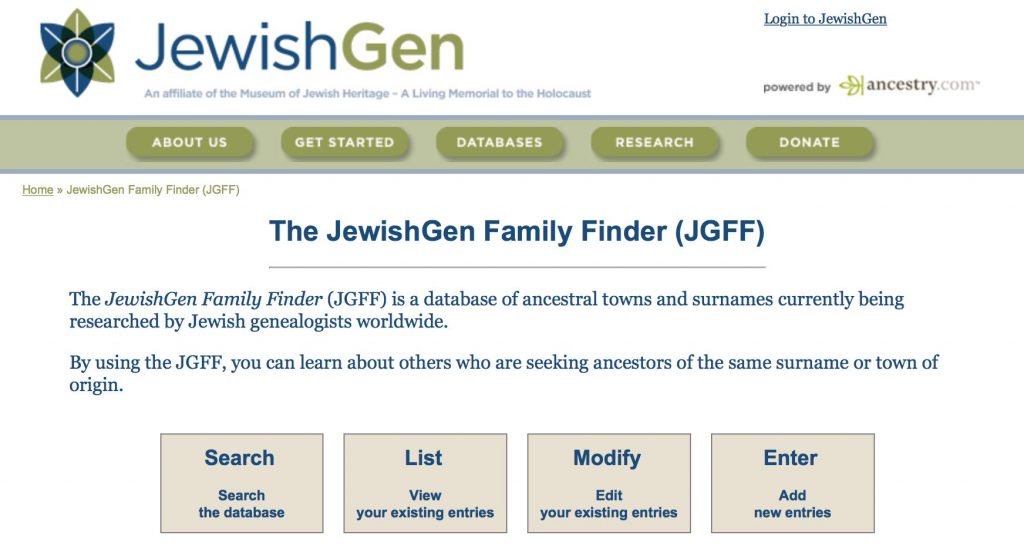 So it should come as no surprise that I made an effort to add links to JGFF on the towns in the B&F Compendium of Jewish Genealogy. When I launched it last year, the roughly one thousand Polish towns had links to their search results in the JGFF. I spent a lot of time verifying the links and making sure I only added links to towns that had listings. That, however, was a mistake.

The reason it was a mistake to only link to JGFF when there were listings, was that it could never be up to date, and if your family was from a town that had no results, you wouldn’t be aware of that fact. So now I link to all towns in the compendium. If you’re researching a town your family came from, and you click on the JGFF link and get no results, make sure to add your family!

If you see towns where your family came from, then I strongly recommend adding your family to the JGFF listings for those towns. Keep in mind that you need to be logged in to JewishGen for the JGFF links to work. If you try to use them without being logged in, then you will be prompted to log in. If you need help figuring out how to enter your family and town information into JGFF, see my article on the JewishGen blog.

I don’t know exactly how many of the more than two hundreds Polish towns I added yesterday had listings in JGFF since I linked to all of them, but I would say that based on spot checks as I added them that roughly half of them had entries. Even so, keep in mind that even in the original towns there may only be a few entries. The 59 towns above were only the ones that had no entries, but there are many more that only have a handful of entries. Go add your surnames and ancestral towns to JGFF today (and as I explain in my original article – don’t do it anonymously).

2 thoughts on “When was the last time you updated your JGFF listings?”