Recently, I read about New Zealand’s policy of preventing parents from naming their children certain names, particularly offensive names. Now, the rules in New Zealand are not overly strict compared to some other countries, such as Denamrk where parents have to choose from a list of 7000 pre-selected names, or Germany, where the gender of the child must be determinable by the name, but it still seemed a bit restrictive. Perhaps the most restricted is Iceland, which makes people choose from 1712 male names and 1853 female names listed in the Personal Names Register, or appeal to a special committee that usually says no (see the recent story of one teenage girl trying to appeal).

I was interested to see that the most rejected name was actually Justice. To me Justice seems very similar to traditional names like Prudence or Charity. Certainly those names are not banned. I’ve never met anyone named Justice, although I do remember the character Justice played by Shannon Elizabeth in the 2001 comedy Jay and Silent Bob Strike Back:

I then wondered how many people named their babies Justice in the United States. Luckily that’s easy enough to figure out (at least approximately), the Social Security Administration publishes the top 1000 names for both boys and girls in their system, dating back to 1880 (while Social Security started in 1937, the list is indexed by birth year, so the names go back much further).

Here are the results for the past 10 years for boys and girls: 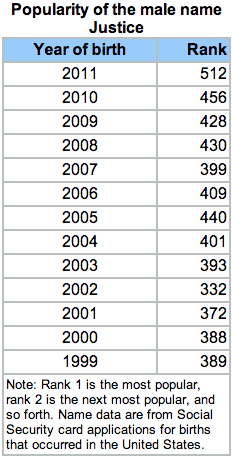 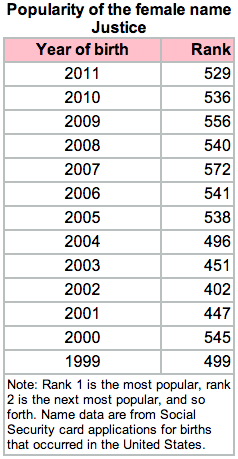 So in the past ten years, Justice ranked somewhere between 332nd and 556th most popular name for boys and girls. What seems a bit strange is that if you go back to the beginning, the name as used for females only goes back to 1994, and the name for males shows up the first year (1880) at rank 993 (almost out of the ranking), then doesn’t show up in the top 1000 until 1992, when it shows up in rank 821. What caused the surge in popularity as a male name in 1992, and introduced the name for girls in 1994? If you have a theory, post it in the comments.

In case you’re wondering why the name is banned in New Zealand, it’s because one of the rules states that a name cannot be used that “is, includes, or resembles, an official title or rank.” This prevents names like King, Prince, Princess, Constable, etc. as well as Justice. The other names on the list were either judged as offensive, too long, or a punctuation mark. Letters and initials that don’t stand for a real name seem also to have been banned.

Here’s the list (as reported by CNN), with the number of rejections, from 2001 through the present:

2 thoughts on “What does New Zealand have against Justice?”