If you use Ancestry.com

and you have an iPhone or iPod Touch, you might know about their Tree-to-Go app that came out awhile back. It was a very basic application for viewing the family trees that you had on Ancestry.com. Frankly, it wasn’t particularly useful, as it only let you view the trees you had uploaded to Ancestry.com and wasn’t very interactive. In addition, if you had an iPad with its larger screen, it was not optimized for that, and could not show anything more on the iPad than on the iPhone.

That all changed yesterday with the introduction of a new app, now called simply Ancestry.

This new version seems much more polished, and adds some major features.

First off, it fully supports the iPad, and can take advantage of the larger screen. You can now see not only the trees you have on Ancestry.com, but those that are shared with you from other users. 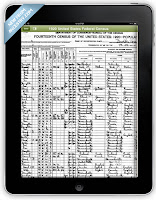 Also, if you’ve attached records to people in your tree, such as a census record, you can now view those records on your device (see the picture on the right).

For those who use both Ancestry.com and an iOS device (iPhone, iPod Touch or iPad) this seems like a very useful application, especially if you share trees with other Ancestry.com users. They also announced that they are ‘carefully considering’ the creation of an Android version as well, although I wouldn’t hold your breath waiting for an Android version.

The interesting thing to me about this seemingly very polished application is the contrast this illustrates with the Mac application they also recently introduced. Why is their iOS app so much more polished than their Mac app? It might seem odd that the iOS app, which is free, has had more attention in its design than their Mac application for which they charge quite a lot. I suspect the answer to this question is that the development of their iOS app is done by a completely different team than the one that handles Family Tree Maker. I’m not sure either of these applications are developed in-house by Ancestry, but either way it seems the teams working on these are completely different.