Inspired by Edie Jarolim’s post Tarnow Calling in her great Freud’s Butcher blog, I’ve decided to share this document I discovered in a family album. The document is from a factory owned by a relative of mine in Tarnów, Poland. From the fill-in date portion, it seems the document is from the 1910s

The factory’s owner, Jacob Thüer (I knew the name as Thier, but my surname also had an umlaut at one point), was a brother of my great-grandmother Sala Thier Trauring, who I knew as a young child. 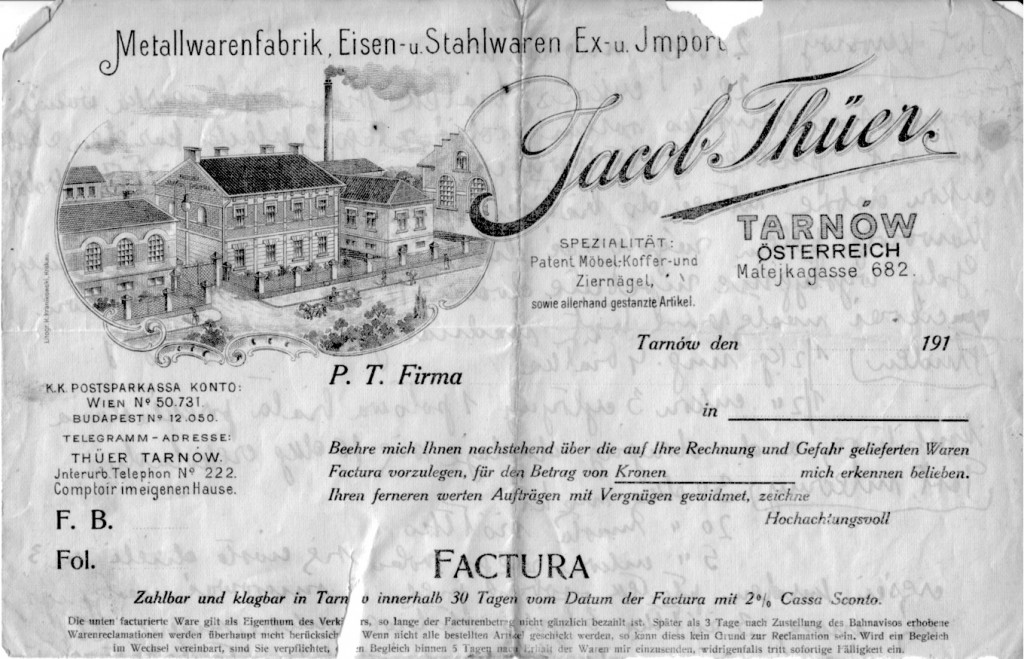 Jacob Thüer shows up in the Yad Vashem Central Database of Shoah Victims’ Names (spelled as Thier, although shown the alternate spelling Thuer as well) with a Page of Testimony (PoT), filed by his daughter. The daughter, Klara Linger, lists herself as living in Sydney, Australia. She says her father died in 1943, presumably murdered by the Nazis.

Oddly, in the transcription of the PoT on the site, the name of the town of last residence is given as Ulicz, Poland. The problem is that there no Ulicz, Poland. Taking a closer look at the original scanned PoT, it’s clear the town listed is actually Tarnów, Poland, and the town was mis-transcribed (from what appears to be a neighborhood or street address before the town name). This is a good example of why you should always view the original scan of a Page of Testimony. If you find a mistake like this, Yad Vashem has a form to submit corrections (which I’ve done in this case).

In addition to the submitter Klara Linger, two other children of Jakob Thier are listed – Samuel and Rudolph Thier. It appears they were all living in Sydney, Australia at the time the PoT was filed, although that is not listed. I don’t know these descendants, but if you know these families from Australia, let me know.