Regular readers of this site have probably noticed my postings have slowed down of late. Please don’t think, however, that nothing is going on with this site. I’d like to take this opportunity to announce one of the main reasons I haven’t been postings frequently, which is that I have been preparing for my upcoming lecture at the IAJGS International Conference on Jewish Genealogy in Washington, DC next month.

I will be speaking on the topic of ‘Utilizing Belgian Archives for Jewish Research’ on the second day of the conference, at 9:30am on Monday morning. This lecture will be a much-expanded version of one of the first articles I posted to this web site, Researching Jewish Relatives Who Passed Through Belgium, which unfortunately is very much out of date even though it was written only last November. After the conference I will be updating the information online about this topic.

The main thrust of the lecture is to discuss the two major collections of Immigrant Police records in Belgium, at the Felix Archives in Antwerp (covering just Antwerp) and at the State Archives in Brussels (covering all of Belgium), as well as several collections of records held by the former Jewish Museum of Deportation and Resistance in Mechelen. These collections relate primarily to the tens of thousands of Jews who resided in Belgium in the early 20th century, leading up to and into World War II, when Germany occupied Belgium. These files frequently contain photographs of the individuals mentioned, and almost always mention the names and birth locations of the parents of each individual, obviously important information for genealogists.

As part of the preparation for my lecture, I have been updating much of the information I am presenting on, largely because of the many changes that have occurred related to the archives I am discussing.

Since being accepted to speak at the conference several months ago, the Felix Archives in Antwerp carried out a major redesign of their website and eliminated the finding guide for their online images of the Immigrant Police index books (instead they just point you to an online search on FamilySearch.org). In addition, the Jewish Museum for Deportation and Resistance is being closed in preparation for the creation of a new museum, the Memorial, Museum and Documentation Centre on Holocaust and Human Rights. Besides simple changes to screenshots in my presentation, these major changes have required me to re-work much of what I will be speaking on in my lecture. These two archives made up two out of the three archives I discuss in my lecture, and both have been changed considerably.

The introduction of an online search interface to the Felix Archives collection of Immigrant Police records from Antwerp was indeed a major breakthrough in researching those records, although the removal of the finding guide to the online index images by the Felix Archives in deference to this online search interface was a mistake in my opinion, as being able to browse through the original index pages can sometimes lead you to find records you may not otherwise find – not the least because the index at FamilySearch.org is not perfect. 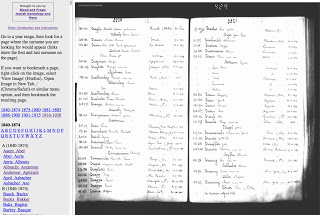 As part of the preparation for my lecture I’ve done something that I thought others may find useful, I’ve created a new browsable interface to the Felix Archives images of the Immigrant Police records index for Antwerp.

I apologize that the user interface is not very sophisticated. As a techie I myself don’t like user interfaces that utilize frames (or iframes as they are now called), but it seemed the quickest and easiest way to put this together (although believe me, even so it was not quick or easy to create a new index to over 5000 images), and I was far enough behind in my preparation for my lecture that I did this in the quickest way possible. If you happen to be an expert at manipulating iframes using CSS, send me an e-mail as I have a somewhat easier-to-use version that has one bug that prevents me from using it instead.

So now you know why I have not been as active as usual on this web site. I hope those people whose families passed through Belgium in the 19th and 20th centuries, in particular in Antwerp, will take a look at the new browsable interface I’ve put together. I welcome comments and feedback on it.

If you’re going to be at the conference in DC, please come see my lecture on Monday morning, or if you cannot make the lecture (I know I compete against six other lectures and two meetings) please at least find me another time during the conference and say hello.