It’s no secret that there has been a large increase in antisemitic incidents across Europe in recent years. No one I’m sure missed the events in France last month, where in addition to the murder of eleven employees of the satirical newspaper Charlie Hebdo (and a Muslim policeman outside the office building), a different terrorist two days later murdered four people in a Kosher supermarket on the outskirts of Paris.

You probably also heard about the murder of five (originally it was reported as four, but one victim later died of their wounds) people in the Jewish Museum in Brussels, Belgium in May of last year. The terrorist believed to have carried out that attack was later caught in France, having French and Algerian citizenship, and having fought in Syria for ISIS before returning to France in 2013. If convicted he would be the first European to have gone to fight for ISIS and then to have returned to Europe to carry out an attack.

You may, however, have not noticed an event that happened last summer in a city called Wuppertal, Germany. Last August, three men, whose roots are Palestinian, firebombed the Bergische Synagogue in Wuppertal. The synagogue was originally burnt to the ground by Nazis during Kristallnacht in 1938, and had been rebuilt only in 2002. The synagogue did not burn to the ground this time, luckily, which is probably why the story did not receive a tremendous amount of mainstream coverage. The court proceedings were recently held, and the three men were found guilty of arson, but amazingly the court declared it was not an antisemitic act (presumably such a declaration would have been similar to the US hate crime designation which would have increased the punishment). The terrorists were given suspended sentences and ordered to carry out 200 hours of community service. I wonder if after the original synagogue was burnt to the ground, the courts then also gave a slap on the wrist to the perpetrators? Maybe they didn’t punish them at all in 1938, so this is I guess an improvement? It’s incredibly scary that terrorists can throw molotov cocktails at a Jewish house of worship, and it’s not considered a hate crime. If things continue to deteriorate in Germany in particular, and Europe generally, this moment might be looked back upon as a turning point where hate crimes were justified and allowed to happen without serious punishment. Certainly the next terrorists in Germany who are thinking about attacking a synagogue will decide the risk is low for them, since these terrorists only got community service as punishment.

So what does all this have to do with a house? and genealogy? I don’t hear about Wuppertal very often, so when I do it of course focuses my thoughts on my family that used to live there. My grandfather had two uncles that lived in Wuppertal. They both fled Germany as soon as they could after Kristallnacht, one making it to the US and one heading to British-Mandate Palestine. The one who made it to the US was a prolific collector of family photos, which I am grateful for in my genealogy research. One photo I came across many years ago was a photo of his house in Wuppertal: 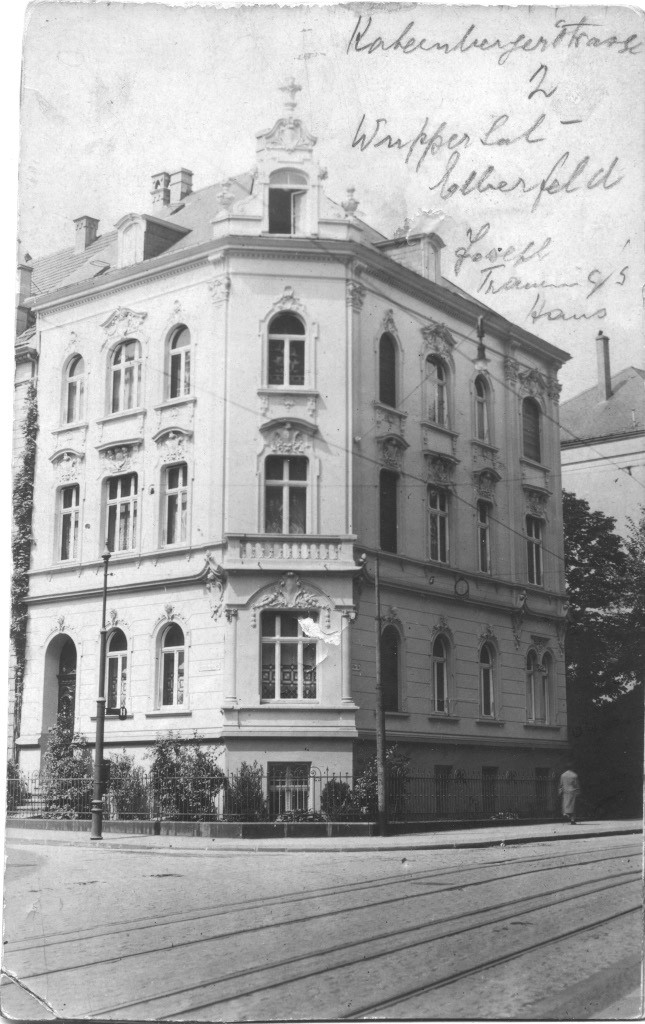 It’s hard to read the street name, at least for me. I couldn’t find the street name easily online. I thought perhaps the name had changed over time. I then remembered that years ago I found an old map of Wuppertal (then called Elberfeld-Barmen) which had a list of streets: 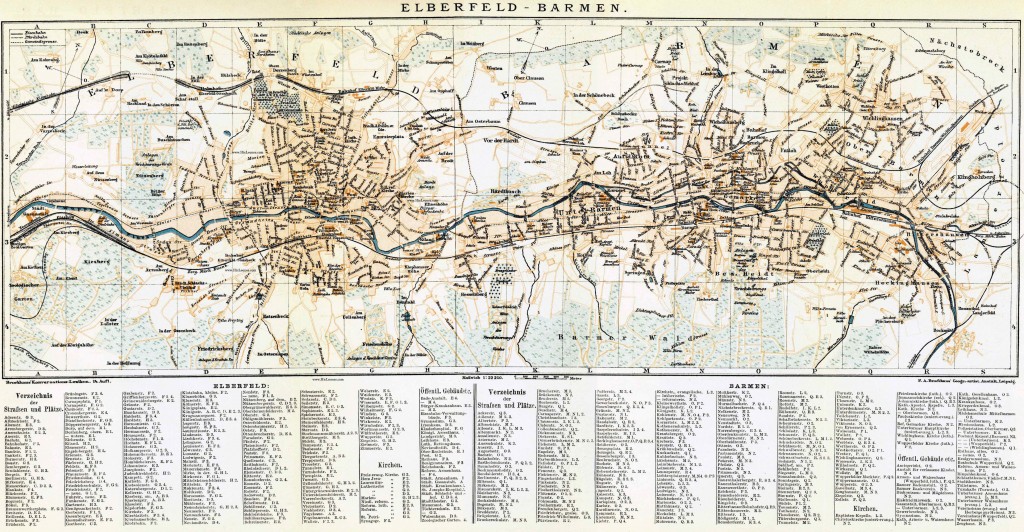 I found the map years ago, and have long forgotten where I found it, but had kept it with a folder of historic maps that I keep on towns where I had family. Taking a look at the street list, I came across Katernberger Strasse, in squares D1 and D2 on the map. Remember using grid squares to find locations on maps? People who have only known Google Maps and other electronic options, probably have never had to use grid coordinates on a map to find the street they want. In any case, armed with the name I did a search on, of course, Google Maps, and found the following: 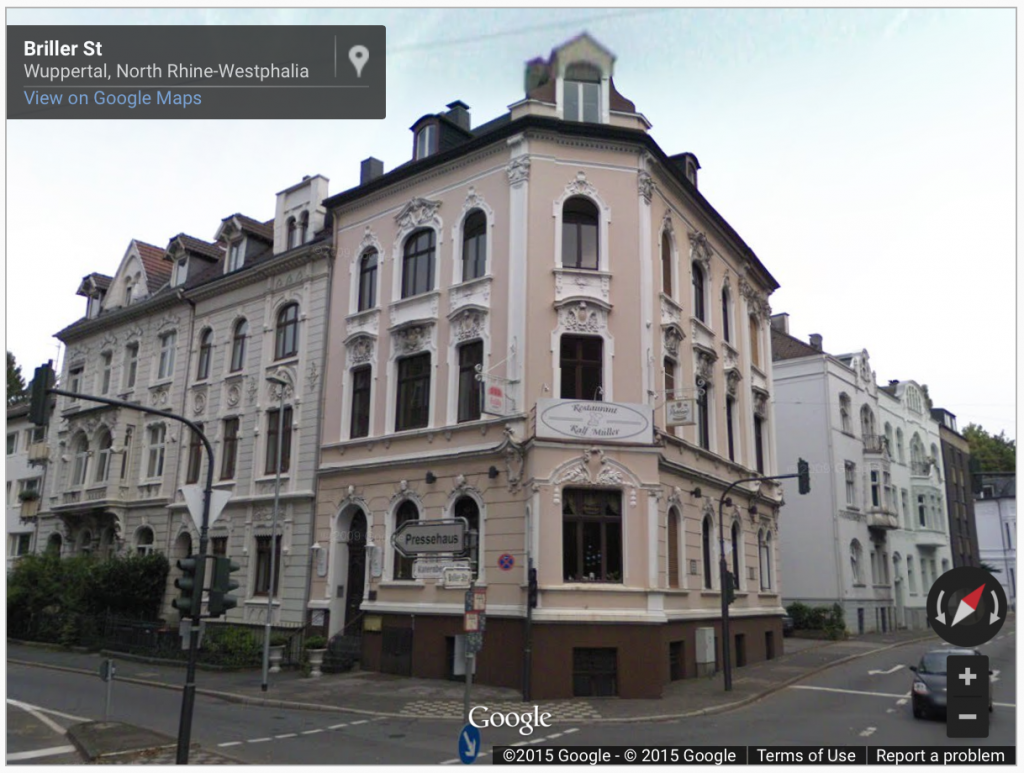 Seems to be a match. Note that there are what look like light-rail tracks running down the street in the photo from the 1930s, while the current photo shows no tracks.  Interestingly Wuppertal is famous for having the world’s oldest operating monorail, the Wuppertal Suspension Railway, which started operating in 1901. In any case, the building now seems to be a restaurant. From what I can find online the photo from Google isn’t current, because that particular restaurant is no longer there.

I wonder what the history of that building has been since my family fled Germany. Who was it sold to when my family left? Who lived in it since then? When did it become a restaurant? Did the various residents of the building know that a Jewish family once lived there? Is there still evidence in the building of things like outlines of mezuzahs in some of the door frames?

2 thoughts on “Looking for a house in Germany”