I’ve been meaning to write this post for the past few weeks, and am sorry I did not do so earlier. There have been a number of changes in access to data of interest to genealogists in the United States going on, and in some cases this can seriously effect the ability of people to do research.

Last month, the Social Security Administration, without any announcement, extended the amount of time one must wait to get the names of parents on a social security application from 70 to 100 years from the applicant’s birth. In other words, if last month you could order an SS-5 form of someone born in 1941 and find out their parent’s names, now you will not be able to order that record until 2041. Put another way, you can only order records today for people born before 1911. In fact, the reality is worse, you can order the SS-5 and they will charge you for it, but they will just white-out the parent’s names which is probably the only good reason to order an SS-5 anyways.

Reduction in State records in the DMF

Another change also took effect last month, when it was announced that some state death records would no longer be incorporated into the Death Master File, and over 4 million existing records would be expunged from the existing file. The reason for this is a claim that state records have different privacy rules, and thus cannot be incorporated into the public Death Master File. This also means nearly a million records a year will no longer be added to the Death Master File going forward (over over 30% of records that would have been added). Why this wasn’t recognized for the past decades this file has been available is not mentioned. Additionally, it seems the Social Security Administration has also dropped last residence zip codes from the information they add to the Death Master File. When dealing with people with common names in large cities, zip codes are very useful in figuring out which record it the correct record.

In my home state of Massachusetts, a bill (H.603) was introduced earlier this year in the state legislature to restrict access to birth records in the state. Massachusetts has always been an open access state when it comes to public records, so this would actually be the first time that access to vital records have been restricted in Massachusetts. Open access to vital records can be seen as an easy way for identity thieves to steal information, or as an easy way to prove the legitimacy of identities. This reckless attempt to restrict access to these records is not just a setback for genealogists, but will restrict access to those people looking to build a family medical history (needed for some inherited diseases) and also restrict the ability of military personnel to track down next-of-kin of soldiers, something the genealogical community has helped the military with for many years. It’s also a bit of political hackery, as it doesn’t actually address the issue of identity theft.

It’s not clear to me why this has become a political issue for some, but I guess seeming to protect people’s privacy (while not actually doing anything about it) is good politics. Politicians love to scare people and tell them that their identities will be stolen if the government doesn’t crack down on identity theft. Except, they don’t actually crack down on identity theft, such as addressing how its possible for someone to file for taxes with the social security number of a deceased person. You’d think the IRS would have access to the Death Master File, and could automatically check social security numbers against filings, but that would be too simple a solution (and would actually put the onus of checking for fraud with a government agency).

In steps Representative Samuel Johnson (R-TX) and his Keeping IDs Safe Act of 2011. This bill, also knows as the KIDS Act, would make it illegal for the government to release the Death Master File at all. Does it address fraud at all? No. Does it prevent government employees from sharing information with identity thieves? No. How about legislating 10 year jail sentences for government employees who release personal information to anyone unauthorized to view it? Regardless, this bill and some of the press coverage of identify thefts that led up to it, has scared various genealogy companies into cutting back on access to the SSDI.

It’s worth noting a story from when I was a child in Boston. As I recall, my teenage sister had gone to get her driver’s license and it was supposed to be mailed to her. Except it never arrived. Eventually she contacted the RMV and they sent her her license. What happened to the original one? Nobody knew. Well, someone knew. One day we get a call from a branch of our bank the next town over. This was when people still went to the bank to, you know, do bank stuff. A woman had arrived each day over the past several days and deposited checks into my sisters account adding up to a lot of money. Before those checks could clear, she arrived again at the teller she had been depositing those checks with, and asked to make a withdrawal. She had a driver’s license with her picture on it, but my sister’s name. The teller didn’t know my sister, but she thought the woman looks a bit older than my sister’s age as listed on the license. The teller asked the woman to wait a moment, and brought the license to the branch manager. The manager had previously worked in the branch my family went to, and actually knew my family, and knew this was not my sister. It was an interesting scam, of course. Depositing checks with the teller so the teller would associate her with depositing money into the account, then using a fake license to withdraw money from the account. If the branch manager hadn’t previously worked at the branch in our town back in those days when branch managers knew their customers, the woman might have gotten away with it. In the end, I don’t remember if that woman was arrested, or got away. I do remember being told they had tracked the scam back to the RMV where multiple licenses had been forged with incorrect photos. I don’t know how much the RMV worker was paid to forge my sister’s license, nor what the thought process was that led them to risk doing that, but presumably if there had been harsh laws against this, they would not have done it.

I’ll guess most of the people reading this haven’t seen the movie this comes from, but this had to be done: 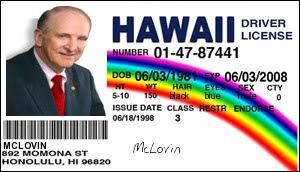 For those who are lost, I’ll share this clip from the movie Superbad:

That isn’t high art, and that clip is highly edited from the original (this is a family blog after all), but I felt it necessary to insert a little comic relief here. Back to the issue at hand…

The easiest site to search SSDI online has long been Rootsweb, which is a genealogy community site that has been hosted and run by Ancestry.com for more than 10 years. The Rootsweb SSDI page just days ago changed from a site that allowed full searching of the SSDI, to the following message:

If you follow the link to Ancestry.com’s own SSDI search page, you can search and get results, but unless you are a member of Ancestry.com, you only get partial information. Even if you have an Ancestry.com subscription, they’ve further cut back on the information available in their SSDI database, as they describe:

This is a bit of pre-emptive work it seems, to keep the politicians off their backs.

Ancestry.com is not the only company to cut back on access to the SSDI. GenealogyBank has eliminated the social security numbers from its database altogether. Genealogybank offers free searching of their SSDI database, but you must register for the site in order to see the results. Even if you’re a subscriber, there are no social security numbers listed in their database at all now. GenealogyBank says they removed all social security numbers after people called them and explained they were erroneously in the SSDI and everyone could access their social security numbers through the GenealogyBank database. One article I read online estimated that out of the 2.8 million new entries added each year, some 14,000 entries are added for people who are still living. That seems a clear statistical estimate (half of one percent), and I have no idea how they came up with that number, nor how many of those false entries get removed from the database in subsequent revisions. I’m not saying people are not horribly effected by these mistakes in the SSDI, but maybe the solution is to fix the processes that introduce those mistakes? Any even if there are 14,000 mistakes a year, no one has shown that this has led to a single stolen identity as far as I can tell.

Also, for a comparison of the Ancestry.com and Familysearch.org SSDI databases (written before the changes), see this article from Ancestry Insider called SSDI: Ancestry.com vs. FamilySearch.org. If you have a subscription to Ancestry.com, it might be worth it to take a look at their database as well, to see if they list the ZIP code for earlier entries in the database.